Going to college in a small-town rural setting, our options on any given weekend night were limited. Or maybe we just limited ourselves: we could have gone to the movies, gone hiking, or tried to make friends outside of campus and entered a local social scene that way. But no, that would have required too much work. Instead, we got really, really drunk with each other in various basements and living rooms.

To add some variety to what may seem like a stale social life, we found creative ways to get faded off new, varied brands of alcohol. And we did this with another aim in mind: to get as drunk as possible for as cheap as possible. We were ballin’ on a budget and soon found drinks that gave us the most bang for our buck. Perusing the aisles at the local sketchy corner store that sold to minors, we discovered what other college students, hipsters, and homeless people the world over already knew: malt beverages are awesome. Malt liquor, bum wine, mysterious fusion drinks – the possibilities are endless.

Given my habits in my wilder, degenerate alcoholic days, I think it is safe to consider myself a malt beverage aficionado, if not an expert given my extensive knowledge of a vast array of brands. Here are my picks for the Top Ten Best Brands of Malt Beverages. And by “best” I mean cheapest/dirtiest/most awesome. Beverages are ranked based on alcohol percentage to cost ratio, taste (or lack thereof), packaging, and fun factor. 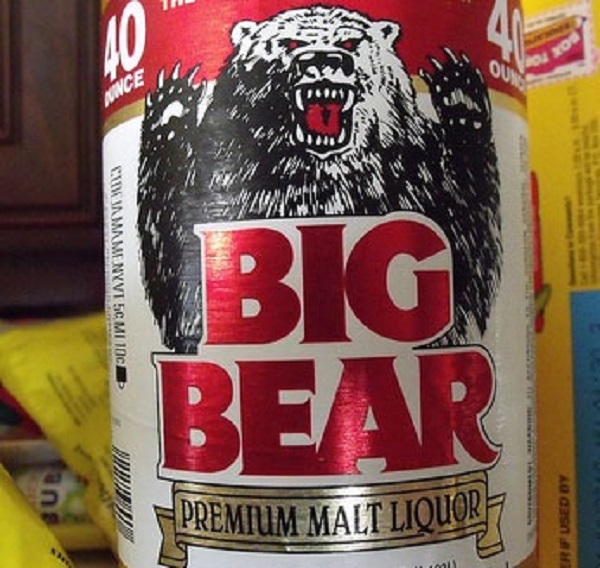 Big Bear really isn’t that special and is hardly sold anywhere. Except in Seattle, where it is the only 40 oz. of malt liquor to be found in many highly populated areas. You see, in an effort to curb alcohol abuse amongst the homeless (screwing over hipsters and frat bros in the process), the City Council banned all brands of malt liquor and high-alcohol malt beverages in certain areas. What brand they inexplicably seem to have forgotten is Big Bear, which is the 40 of choice entirely out of necessity in the U District and Capitol Hill. City-aided monopoly aside, Big Bear’s appeal lies in its label. There is a scary, big bear as the logo. It is a big fricking bear. It is growling with big claws because it is a big bear. Drink two and you’ll show off similar traits. Rawr. 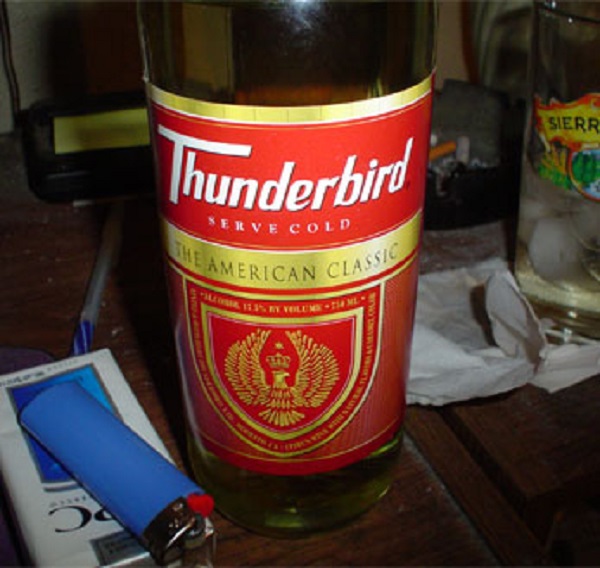 One of the benefits of bringing a malt beverage to a party is that, due to its generally single container nature, you don’t have to share; bring beer, people are going to snag cans until you’re all out. If you bring Thunderbird to a party, you can be 100% sure that NO ONE is going to ask for a sip. T-bird is straight bum wine, fortified with vitamins because, rumour has it, the government makes the manufacturer do it so the homeless get some nutrition in their diets. It tastes terrible, but it will certainly get you faded. At over 17% alcohol and costing as little as a buck fifty in some places, you’re getting what you paid for – stupidly drunk for no money, and no pleasure in the task. One of the worst decisions I witnessed in college was watching a friend drink one of these bad boys with a bottle of Robitussin on the side. It was completely unnecessary – Thunderbird can get the room spinning and cause auditory hallucinations all on its own. 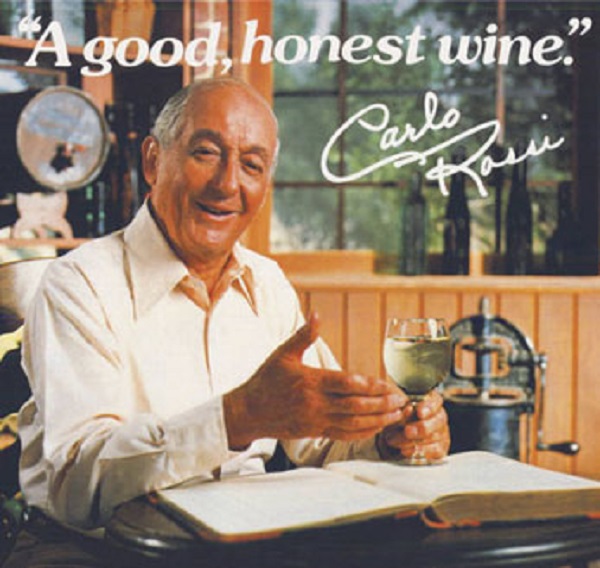 There are some malt beverages that are meant to be shared. Carlo Rossi is one of them. Grabbing a jug of this fine wine available in several flavours and splitting it with 2 or, if it’s that kind of night, 1 other friend(s) is sure to stamp you a ticket on the blackout train. The novelty of the wine is not only how cheap it is ($9 for a big jug) but also drinking said wine out of the said jug. Master the pinky-through-the-handle technique to impress all your friends, especially the ladies. Because ladies love seeing bros get hammered off cheap booze — it reeks of ambition, a known aphrodisiac. Stick with blush or sangria and avoid burgundy at all costs. 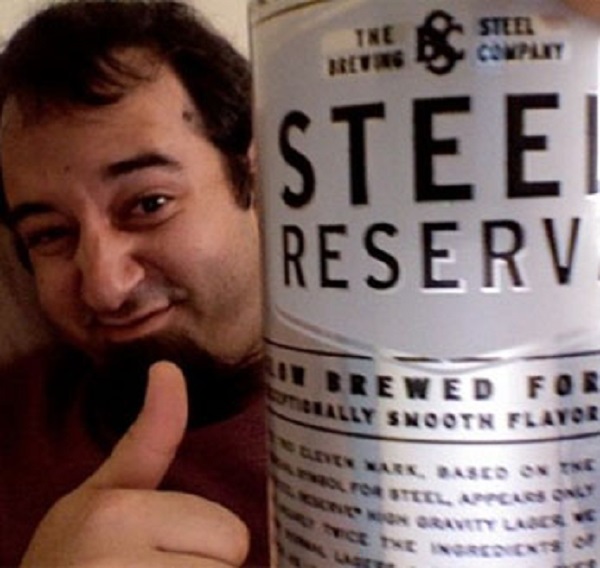 Steel Reserve is a tough guy’s 40. Clocking in at 8.1% and costing as little as 99 cents, it gets you crunk. But half the battle is actually drinking it: SR tastes like the bastard stepson of other malt liquors, the spillover that sat at the bottom of the tank and kept fermenting and getting more alcoholic. Pull on all your reserves to down a bottle and you’ll be feeling like a champ with balls of steel. 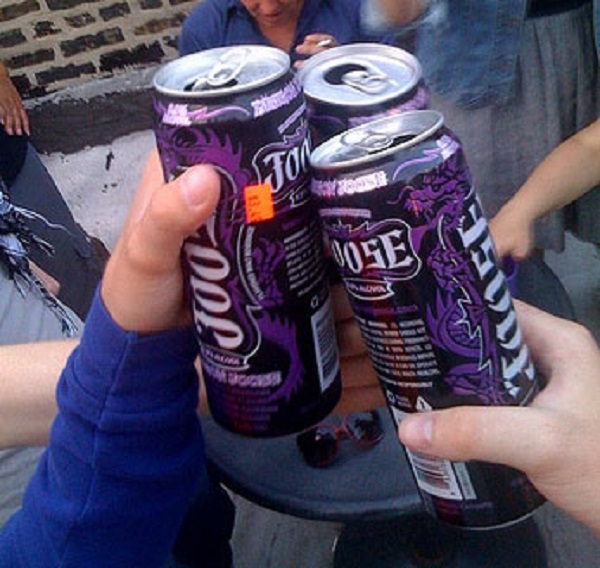 The OG of highly alcoholic energy drinks, Joose gets the job done. It’s 9% plus depending on the flavour and used to be chock full of ginseng, taurine, and caffeine to help you make poor life choices; now, since the widespread ban on alcoholic energy drinks, it’s just 9% plus and full of sugar. What was once considered rare, if not mythical, the purple flavour is by far the best, tasting as if Welch’s grape juice bounced on the fam to enjoy a 3 day crack binge. It’ll get you feeling a little cracked out as well, and like any good drink, will turn you into another person altogether. One family, girlfriends, and authority figures should probably never meet. 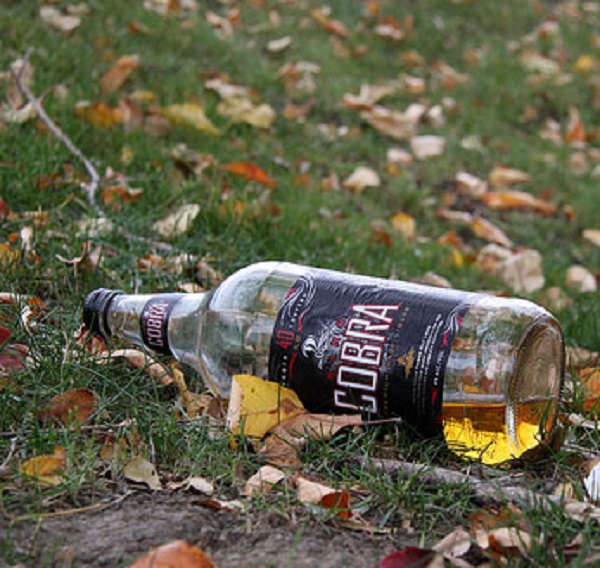 King Cobra is cool because the can or label on the bottle feels like snake skin. KC goes the extra mile, trying to stimulate the elusive sense of touch with its packaging, creating a more well-rounded sensory experience. Well actually, it’s just bumpy, but that’s still pretty cool, at least they tried. And you’ll be in for a bumpy ride too after drinking a couple of deucers or a 40 of this high-percentage malt liquor. 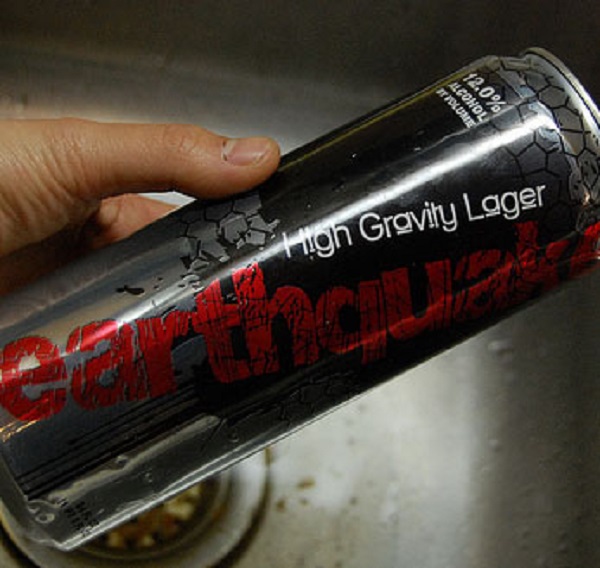 For those nights when you just need a quick and dirty blackout, preferably by yourself, Earthquake is your go-to option. Sold only in 22-ounce cans (god I hope they don’t make 40s of it, and that no one ever tries to consume one), the ‘Quake does not mess around with extraneous frivolities. The can is black with red lettering; no clever logo. It weighs in at 12%. It tastes absolutely terrible and makes no effort to conceal this sordid fact. And it costs a dollar. And it will get you seriously drunk off one can. If you can finish it. Earthquake tastes a lot better while cold, so race yourself to finish it before it gets lukewarm and undrinkable. You’ll also get sloppy in the process. 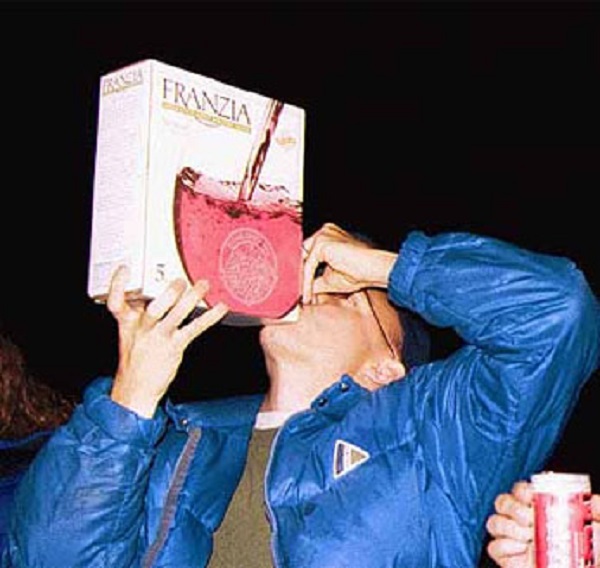 No bum wine should be this fun. Eschewing convention, Franzia comes in a bag inside a box, with a convenient nozzle for pouring. Forget the box and rock out with your bag out – you’ll become the life of the party as you encourage others to “slap the bag” while you shove the nozzle and its contents down your thirsty, refined throat. For a malt beverage, Franzia is a little pricier (as much as $14), but it’s worth it, if not for the packaging alone, then for its high alcohol percentage and a large quantity of booze. 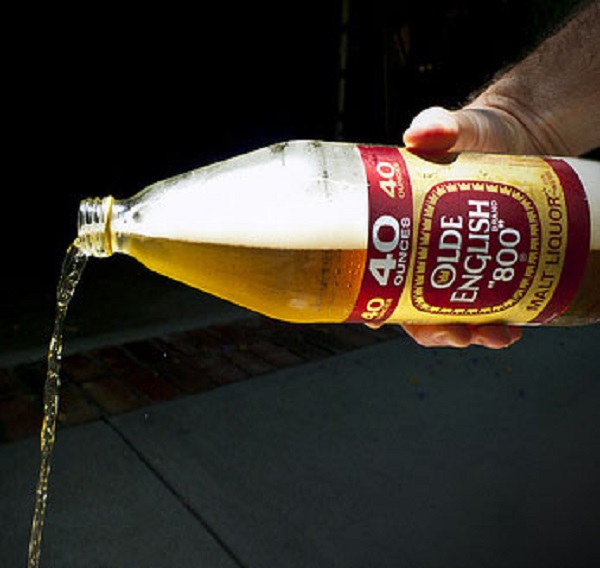 It’s the drank hoodrats bring on drive-bys and pour out for the lost homeys while posted on the corner. At least, that’s what we all thought. It’s the best brand of malt liquor, period. It doesn’t taste that bad, it begs to be sheathed in a brown paper bag, and people will think you’re hard for drinking it. There are two kinds of people in this world: people who drink Mickey’s and people who drink OE. Mickey’s people are mentally weak. They prefer the 40 that tastes better because they can’t handle the realness; it’s just too much for them. OE is the realness. Keep it real. 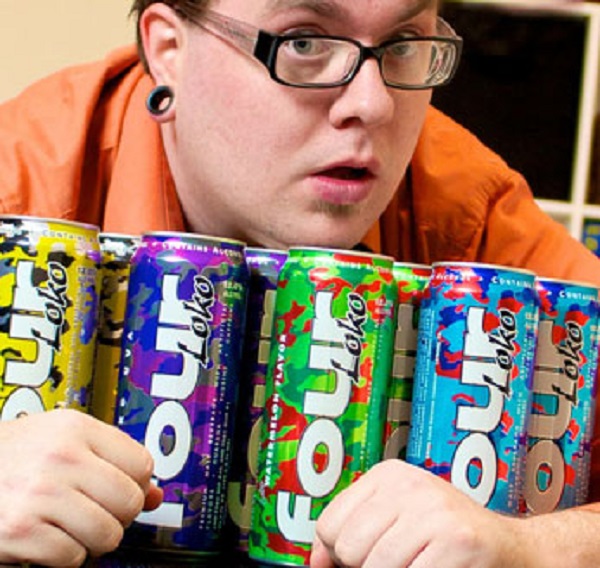 No other malt beverage has been reviewed by the New York Times, decried by the Federal Department of Health, and caused CNN to put “blackout in a can” in one of its headlines. Four Loko is just that noteworthy. The giant 24-ounce can is highly alcoholic and in its heyday was filled to the brim with stimulants that would keep you raging hard long after you should have stopped, for the sake of your dignity and those of anybody who knows you. Like any good drug, getting Lok’ed is a different trip every time. You have no idea what’s going to happen, and you become a different person, one your friends will be trying to ditch at every turn to avoid further embarrassment. Keep an eye out for stockpiled cans of “Old Loko” sold on the black(out) market.

Have you enjoyed any of these ten retro malt drinks? If you have why not tell us what you thought about it in the comments below.

Top 10 Classic and Unusual Ways To Make a Brandy Alexander

Top 10 Recipes You Can Make With a Super Slushie Maker