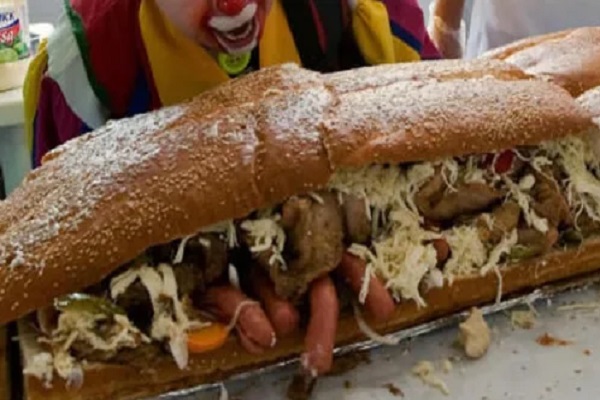 The World’s Biggest Ever Ostrich Sandwich

A group of over 1,000 female chefs were working tirelessly to set this world record in 2008 when everything descended into chaos. The sandwich measured 1,500 meters and was packed with 1,000 kilos of ostrich meat while the rest was chicken meat. Everything was pretty much done and the Guinness records officials were waiting to take measurements when the crowd got excited and started eating the sandwich. The evidence was consumed before the record was made so it was hard to determine whether the record setting was actually successful. 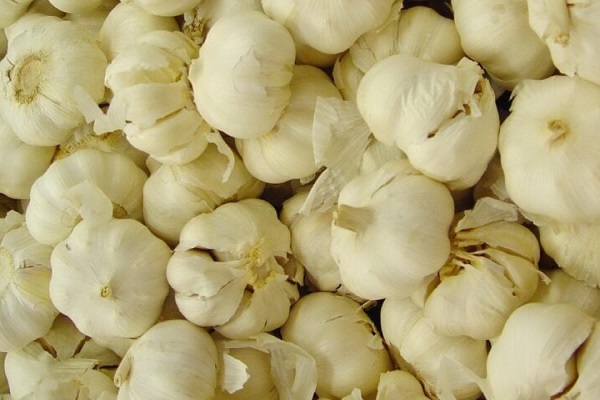 Most Garlic Cloves Eaten In A Minute

Garlic cloves are scary enough to the eyes leave alone the tongue. Many people have tried to break the record over the years which currently stands at 36. Garlic is bitter and strong so you can imagine the breath of the person that chews down dozens of those things. Even while washing down each mouthful of cloves with water, contestants struggle to stay alert after eating them. Lots of videos on Youtube claim to have beaten the record which was set in 2012 but none of them has been approved by Guinness so far. 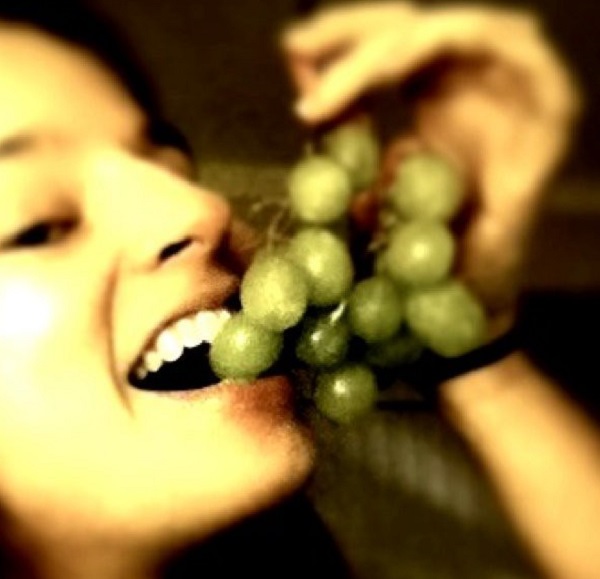 Kaif Ali Khan of India holds this world record but it is amazing to watch the video of him pulling it off. The grapes have to be picked off a dish with toes and be successfully fed to the mouth for the record to hold and he kept it up for a whopping three minutes without resting. 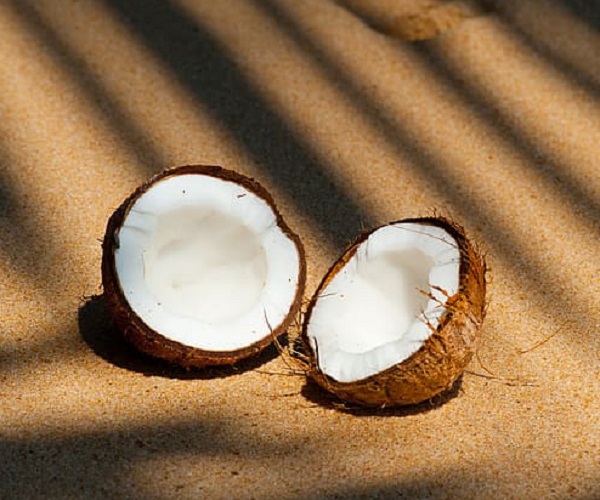 Most Coconuts Smashed In A Minute By Hand

There are lots of videos online of failed attempts of this record because you need hands of steel and an astonishing level of pain tolerance to pull off the record. You can literally feel the contestant’s pain as they hit coconut after coconut with most of them refusing to give in and just sliding to the side. The record was unbroken for five years until 2017 when Abheesh P. Dominic of India smashed 122 coconuts in 2017 to set a new record. He literally collapsed after breaking the record and his pain was so obvious. 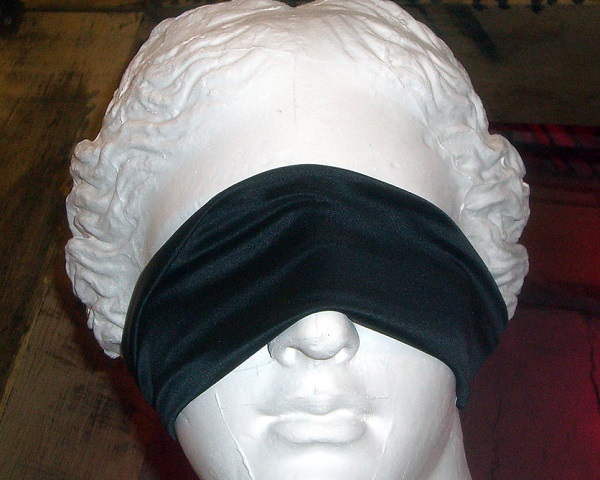 Most Coconuts Smashed Around A Person While Blindfolded

This is one of those crazy world records you hold your breath while they are attempted praying that the contestant finishes it whole. Coconuts are spread around the contestant as someone goes smashing them with a sledgehammer and you can be sure that the distance between the hammer and the contestant’s vital body parts including the head is not safe at all. You have to lie still while blindfolded and wait out the smasher as they swing their hammer until the minute is over. This terrifying world record is currently held by the two Indian martial arts stuntmen Rakesh B and Prabhakar Reddy P. 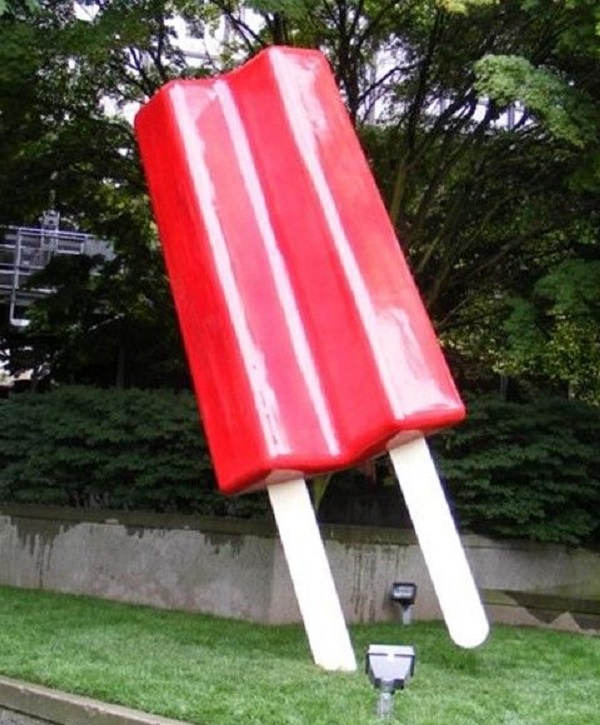 Talk of epic fails, this one went so horribly wrong that the streets had to be closed and the fire department called to prevent a disaster. The record was being attempted by the soft drinks company Snapple in 2005 which was attempting to raise a 17.5-ton popsicle in New York’s Union Square at a height of 7 meters for it to count as a world record. The giant popsicle which was transported by a freezer truck from Brooklyn started melting before being offloaded from the truck. The crowds started fleeing as they feared a tsunami of goo and water swallowing them up forcing the attempt to be stopped and the fire department to be called in to prevent a disaster.

Most Watermelons Chopped On The Stomach In A Minute

Yes! You really have to hold your breath for this one and the record holders are the same martial arts guys that also hold the record for the most coconuts smashed around a blindfolded man. The two martial artists broke the record in July of 2020 in front of a small crowd as Suresh P, the Indian blackbelt holder lay there as Prabhakar Reddy chopped 64 melons on his stomach with a sharp Samurai sword for a minute without chopping into his stomach. He thanked his ‘iron stomach’ afterwards for breaking the record and getting out alive. 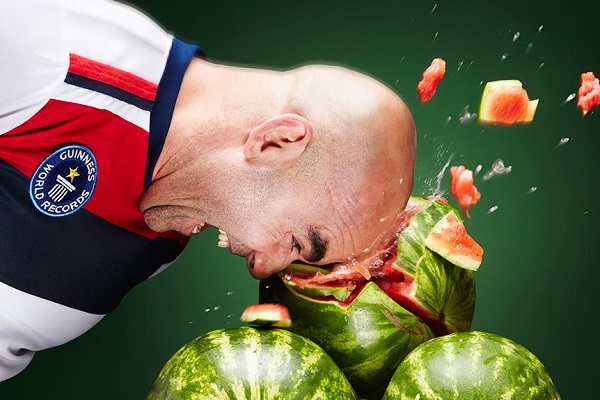 Smashing Watermelons With Your Head

Failing at a world record attempt is humiliating enough when it happens on a private venue, but when you fail on national television, then that becomes something else. That is what happened with one dutchman who bet that he could break some melons in two minutes on national TV and had to be stopped because he almost broke his head after hitting it against the first three melons without breaking any. The record is still held by Tfzi Ahmed of Germany who broke 43 out of 50 watermelons with his head on live TV in 2011 despite claims that someone else broke that record on America Got Talent in 2015. 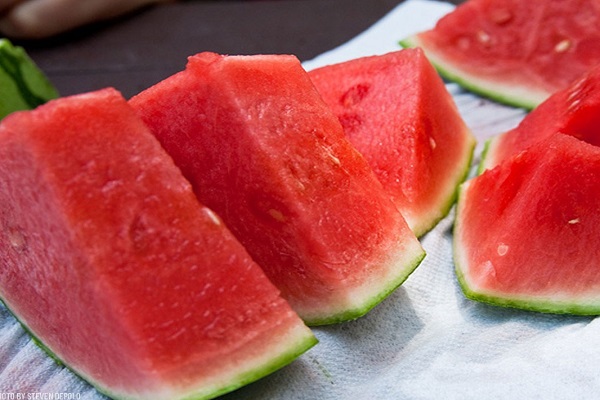 Most Watermelons Self-Chopped On The Stomach In A Minute

This is one of the most contested world records by martial arts and it is currently held by Prabhakar Reddy of India who is a multiple record holder. Unlike the previous stomach chopping which he achieved by chopping the watermelons on someone else’s stomach, he has to chop this one on his own stomach. You can feel the man’s fear in the video as he drops watermelon after another on his stomach and cuts it with one swing of his sword. He managed to chop 38 in 2020 and that is the current world record. 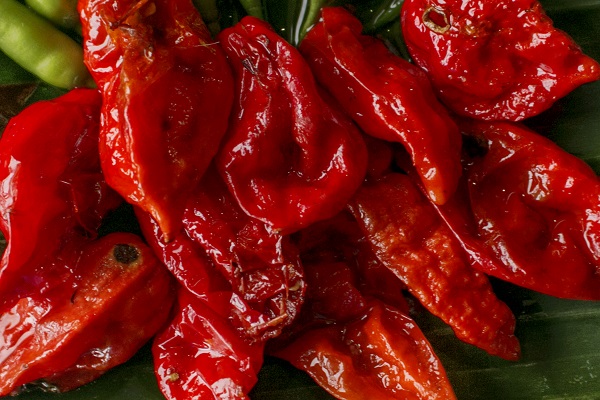 Most Ghost Pepper Chilies Eaten In A Minute

The ghost pepper is one of the hottest chilli peppers in the world with a Scoville heat score of 1, 041, 427 SHU which is several thousand times hotter than a jalapeno. A single bite of this pepper is enough to make a grown man cry. Consuming lots of hot peppers in a short time is also dangerous because capsaicin, the chemical that makes peppers hot is a neurotoxin and too much of it can kill you. It is still thrilling to watch the contestants become red in the face as they chew down gram after gram of pepper and the world record is currently held by Mike Jack from London who consumed 97 grams of that stuff in December 2019.