Jalapeño is the global standard for the heat of pepper for most people because it is the hottest pepper that many people around the world get to taste in their lives but your opinion will change when you hear of peppers 2,000 times hotter than that. The world is full of peppers and hotter varieties continue to be discovered every day with the hottest one at the moment believed to be the Pepper X which has a Scoville heat unit (SHU) score of 3,180,000 which is nearly double that of the Carolina Reaper which was the previous holder of that record. This is a list of ten of the most well-known hottest peppers in the world and you can buy them all on the links provided… 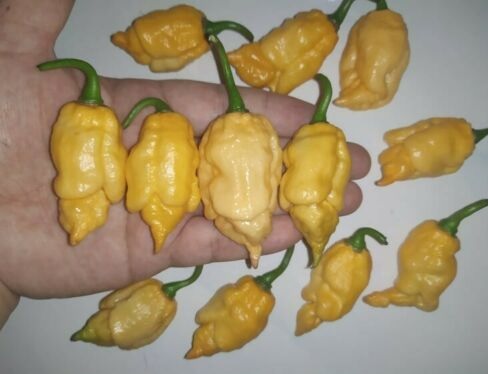 Ed Currie is the man who created Carolina Reaper but he wasn’t satisfied and so he started working on a crossbreed that could increase both the heat and the flavour. It took him over 10 years to perfect Pepper X and not many people have had the opportunity to taste it. Guinness World Records is yet to confirm Ed Currie’s assessment of a 3.18 million SHU heat score but if Carolina Reaper was true, then you can expect this one to be as well.

It looks greenish-yellow when ripe and rather inviting but when it touches your tongue, the sweetness, or rather lack of heat only takes a few seconds before the heat starts coming in waves and that is only the beginning. If you ate out a large piece, the waves will continue for hours to days on end. There are sauces flavoured with Pepper X with the most popular being The Last Dab produced by Heatonist which you can buy below. 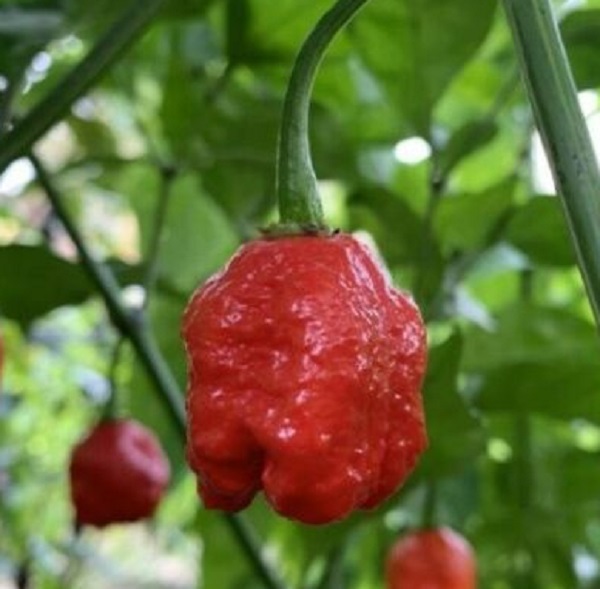 The name came by because the pepper was first grown in Wales and the farmer decided to name it after the Welsh Dragon. Its discovery was a joint effort between the chilli farmer Neal Price and NPK technologies and Nottingham Trent University who supported the effort in a bid to use the super-hot pepper as a potential anaesthetic. Its skin numbing properties come by as a result of its giant Scoville units which clocked in at a whopping 2.48 million making it the hottest pepper in the world until Pepper X came by a few months later. It isn’t commercially produced anywhere yet, so it will be hard to come by any true Dragon’s Breath sauce but there is another popular version made with bird’s eye chillies that will spice up your meals. 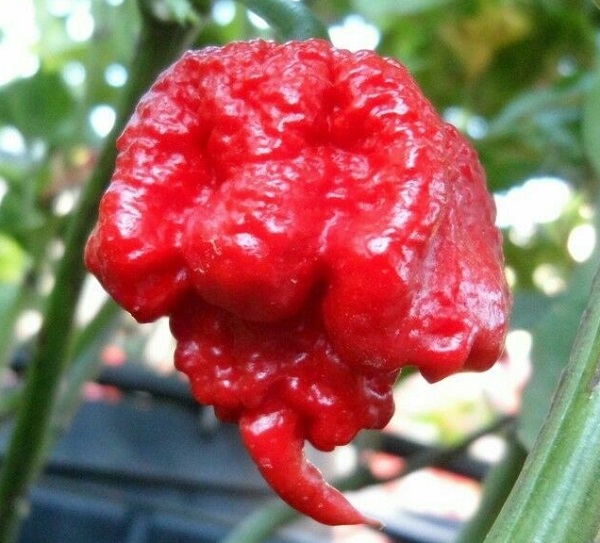 This pepper has retained the spot at the top of the hottest peppers list for a long time now mostly because Guinness World Records proved its 2.2 million SHU score and also because its competitors haven’t been proven by the organization yet. It is still considered the most widely available super-hot pepper in the world and its sauces and seeds can be found almost everywhere in the world. It was also created by the chilli specialist Ed Curie who has also taken the credit for the creation of Pepper X. There are many versions of the pepper but the yellow and red are the most common. The most distinctive feature is the pepper’s long and curved tail which resembles a scorpion’s stinger. 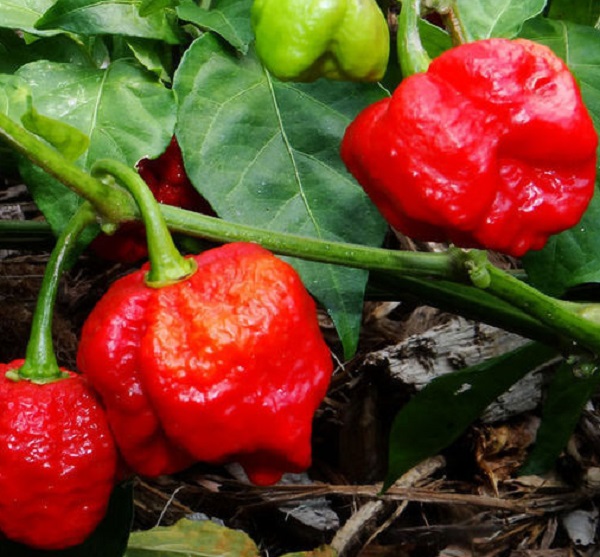 Moruga is the village where this pepper species was discovered and as of 2012 before the Carolina Reaper took the top spot. Was the hottest pepper in the world. A yellow version of the pepper was created later but its naturally occurring form is hot red. It is a simple-looking pepper without a tail and a lumpy body. According to experts, the pepper loads a 2.009 million SHU heat score but still retains a sweet fruity flavour when eaten. Trouble starts a few seconds after eating as the heat starts turning your insides apart in waves. 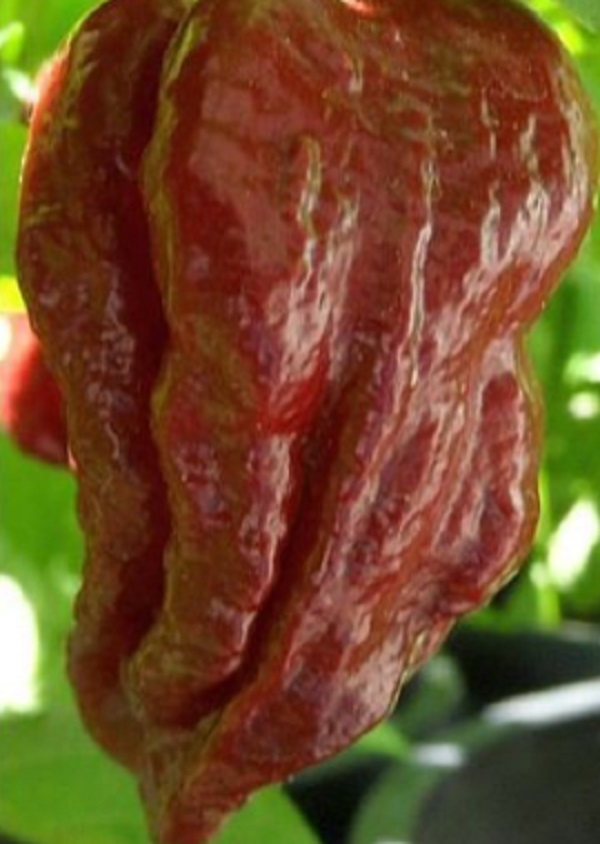 Now, the 7 pot name is believed to have originated from the locals who said a single pod of this pepper could be used to flavour seven pots of food by simply dipping the pod in one pot and removing it and then dipping into the next one. It also originated from Trinidad and Tobago and it happens to be one of the hottest peppers that don’t have a red colour when ripe. It is brown and rather dull and scary looking and packs a Scoville heat score of 1.85SHU making it the third hottest pepper in the world according to the Guinness World Records. Its heat doesn’t kick in instantly either but after 30 to 60 seconds of eating it, you will start experiencing the waves. 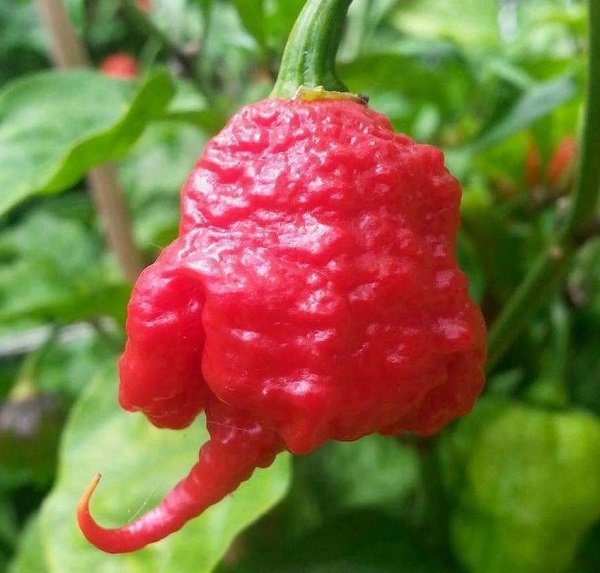 It is easy to confuse this one with the Carolina Reaper because they look astonishingly similar. It also has a long stinger and packs a giant heat score on the Scoville scale at 1.4million SHU. It was created in the early 2000s by Troy Primeaux after he quit a band to become a horticulturalists. Its taste is also similar to that of the Reaper which has led to some controversies over the years. It is still considered one of the hottest of all time by pepper lovers and its sauce my the next best option if you can’t stand the heat of the Carolina Reaper. It was created as a cross-breed between the 7 Pot Douglah and other peppers. 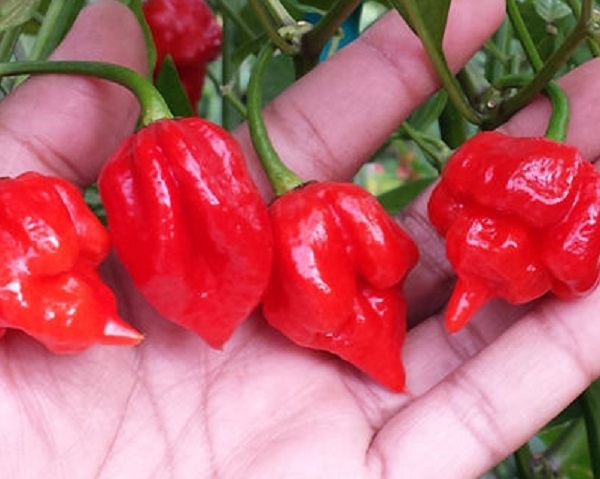 Butch T is the name of the horticulturalist that created this pepper and Trinidad is the country of origin although the creator is American. It was rated the hottest and most pungent hot pepper in the world in 2011 until the above-named peppers took the spot. It is a hybrid of the Trinidad Scorpion but its smell is stronger so you can feel it from a distance even before you slice the pepper. It also has a stinger-like tail which is the main trademark of the scorpions. 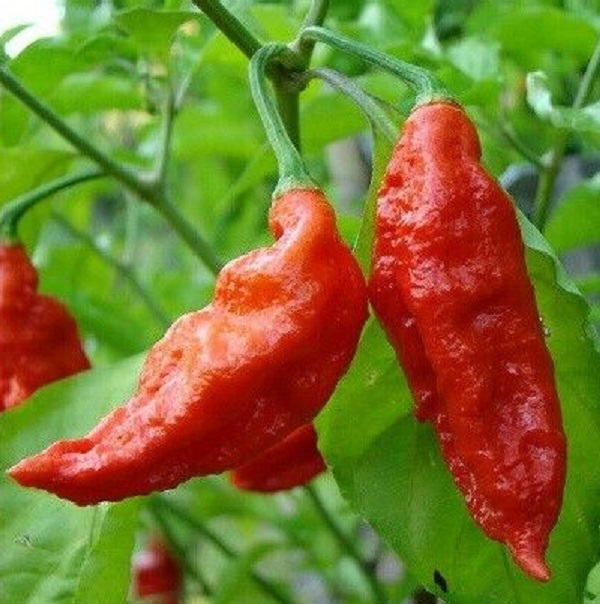 As the name suggests, this is one hot pepper that you don’t want anywhere near your mouth but it also happens to be an ingredient in most hot-sauce options in the world. It held the top spot before Trinidad Scorpion Butch took the spot in 2011 and remains a top spice crop grown in North East India and other countries in the region. It is a smooth arrow-head shaped pepper with a Scoville score of 1.04 million which is higher than most chilli peppers in the market. 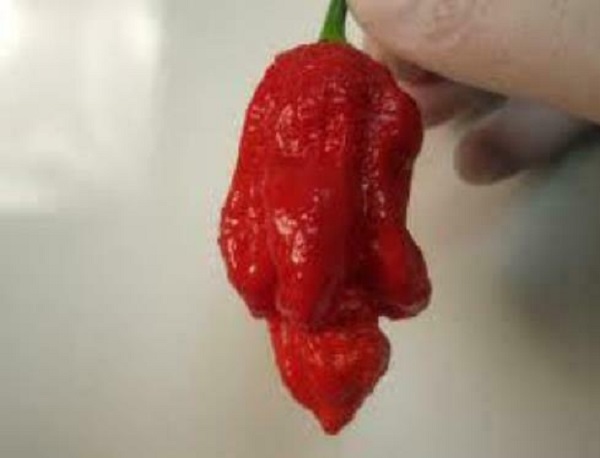 This is another one that closes our one million-plus hot pepper category and it is also from Trinidad and Tobago. It is considered the most bitter of the 7 pot peppers with little to no fruity taste so this one doesn’t care much for flavour. It clocks in at up to 1.3 million SHU which is about as hot as they come from the region. It also has a tail although not bent and pointed like the scorpions and ripens into a bright red wrinkly pepper that gives you a feel of its heat from a distance. 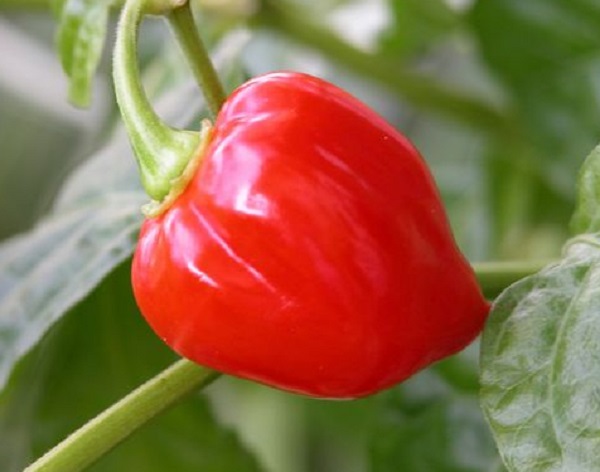 This one takes you back to the good old days between 1994 and 2006 when 1 million-plus SHU was only a rumour. This pepper held the top spot on the Scoville scale for that long and is still the favourite flavour for most hot sauce companies because of its perfect balance between heat and flavour. It is a regular-sized pepper that ripens into a succulent looking red pepper that attracts you to use as a spice as compared to the scorpions.