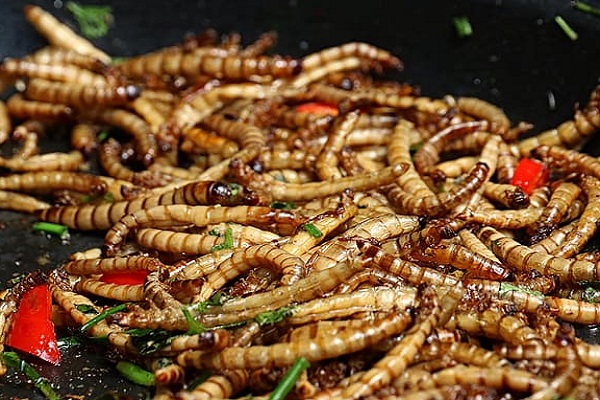 Termites are a homeowner’s nightmare because once they find a route into your home, it becomes very expensive to get rid of them. The same goes for locusts which are seen as one of the signs of the apocalypse as they can wipe out vegetation in biblical proportions. What most people don’t know is that termites and locusts are some of the most protein-rich creatures on the planet and have been consumed by some communities for centuries.

Now, thinking of insects, worms and arachnids as food is often thought disgusting to most people in the West. The emergence of edible cockroach and locust farms in China and other countries has opened people’s eyes to the possibility of turning some of the insects that threaten human survival into food though. It may take a few more centuries for insects to become everyone’s daily protein but these 10 bug diets served around the world are just too delicious to wait on.

Termites have been eaten in most Bantu communities in Africa for centuries and are still a delicacy for many in East, Central and Southern Africa. There are many species of termites, but the most delicious ones are the fertile winged males and females which fly out of the colonies during the rainy season to mate and create their own colonies. In Western Kenya, harvesting the flying termites during the rainy season is a serious economic activity and children may even skip school to help their parents collect a lot more termites.

They are rich in omega 3 fatty acids, iron and calcium apart from their high protein content so they make a great substitute to fish and meat for low-income households. Eating crunchy termites with Ugali, (maize meal) is a treat enjoyed by many families in the region. The termites are often fried until they are crispy and crunchy and then served alongside vegetables. Some people eat the termites raw though, which is a little icky.

If you are planning to visit Southern Africa during Christmas, you will be surprised to find these worms served as a Christmas dish. The Mopane worm industry is worth an estimated $85 million annually spanning the entire southern African region from Botswana to South Africa. The worms like to feed on the leaves of the Mopane tree hence their name.

They are actually the larvae of the emperor moth which tend to lay during the long rains when vegetation is lush. The moths themselves don’t make a great dish but the caterpillars are enjoyed by many people once they are fried or dried and cooked until they are crunchy. Some homesteads use the worms to make stews and soup but you need a stronger stomach. 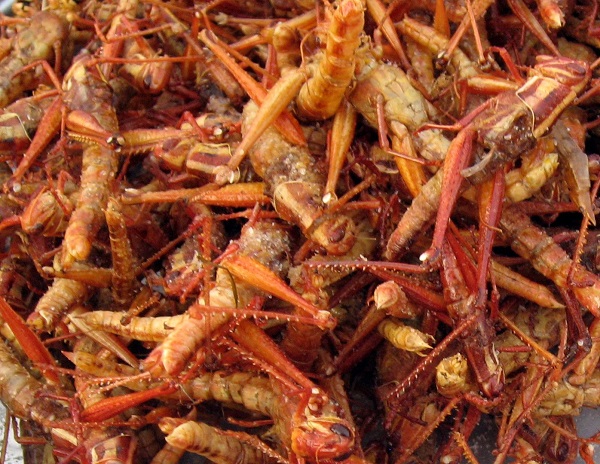 Some people prefer their Chapulines served in tacos while others prefer them on tostadas, but most cringe at the thought of chewing on fried grasshoppers. Catching enough grasshoppers to make a dish of Chapulines is a feat that anyone from Oaxaca, Mexico understands well. The fried grasshoppers flavoured with a drop of lime juice, chilli, onions and garlic are a popular snack in parts of Mexico and now more parts of the world as stores in the US, Canada and other countries stock them.

The traditional method of hunting grasshoppers involves chasing them through the bushes and catching whatever you can reach. Modern methods of farming the grasshoppers are now used increasing the yield and making the process of harvesting Chapulines easier. They are also a cheap source of protein that millions of people now appreciate.

Just like termites are considered pests, coconut worms are pests in Asia and other coconut growing countries. The worms hatch from the eggs of beetles and find a home in coconuts although they tend to destroy the fruit. In Saigon, these worms are considered a rare delicacy that may be more expensive than meat and fish with some estimating that a single worm may cost $1. Like Chapulines, it is hard to gather enough of them to make a meal.

Some people actually eat the wriggling worms raw just soaked in chilli sauce and maybe a little coriander and garlic. The tastiest version is the crunchy ones flavoured with red pepper, garlic and other spices and then dry-fried in oil. They make a great snack that may leave your pockets lighter in the streets if you develop a taste for them.

Cambodia is the one place where most critters are eaten. You will find grubs, grasshoppers, tarantulas, maggots and cockroaches on large trays being served as snacks in the streets. While silkworms are more available, the real catch in the streets are the crickets. There are also locusts and grasshoppers but they are seasonal. You will find crickets almost any time of the year though.

Some have their heads and legs plucked off before they are seasoned in pepper, turmeric, garlic and other spices and then fried until they are crunchy. Some people just fry them with the heads and limbs still intact which gives some visitors the fritters but they are tasty once they land in your mouth. Some food daredevils even compare the taste of fried Cambodian cricket to fried chicken. 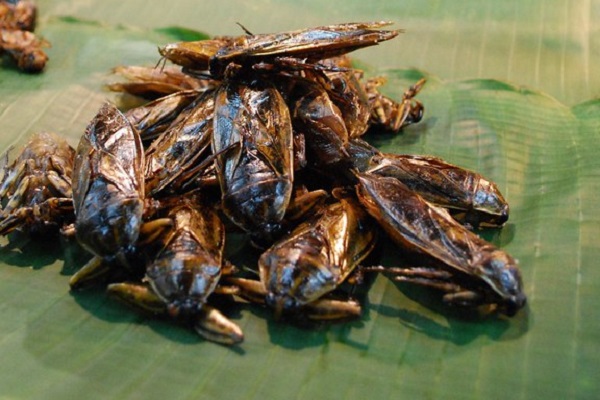 Thailand is another country whose street foods look similar to what you find in Cambodia. Edible insect dishes are found everywhere including Bangkok. Although coconut worms are the most widely served just like in Vietnam, the most sought-after dish is the giant water beetle. With its giant mandibles, legs and wings, the giant water beetle is a scary critter to come across when it is alive.

When fried, the beetles look harmless, but they are still a little scary which is why you need to have a strong stomach if you are to chew on them. They are deep-fried, so you can eat everything, but it is advisable to pluck the head, legs and wings and eat the body. Eating these ones alive would be a bad idea though because they wouldn’t go down without a fight.

When you go to Thailand, you will have to get used to the wide variety of insects eaten all over the country by the locals. Away from coconut worms, the most widely served insect larvae in Thailand is the silkworm locally known as Nhon Mhai.

As the name suggests, these butterfly larvae are primarily bred to produce silk. After doing their primary job, the worms which are longer and softer than coconut worms are sold to street vendors to be fried for food. They become crunchy after frying and since they are less fatty, you don’t have to worry about any stomach-churning internal organs coming out when you chew.

Away from Central Asia, Australia is another country where eating insects and insect larvae are considered a major source of protein among the aboriginal communities. While there is a wide range of larvae which are all called grubs and eaten, the most widely consumed variety is the larvae of the cossid wood moth.

The larvae tend to bury themselves under the Witchetty bushes feeding on the root sap which is how they got their name. Unlike Central Asia where deep frying is the preferred cooking method, the Adnyamathanha people of Southern Australia prefer their worms raw or lightly cooked. Frying is also done to make the grubs crunchy and yellowy on the inside with a better taste and fewer overflows. 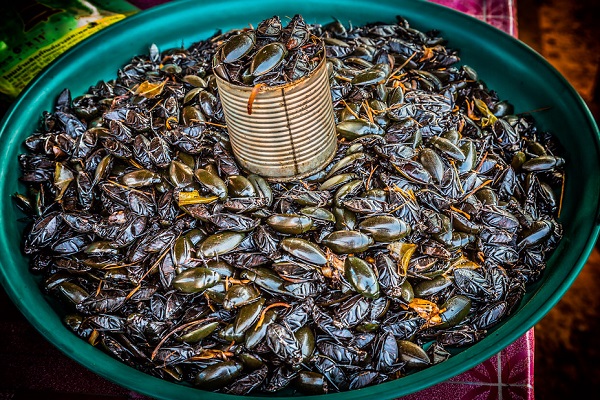 China is the one country where you will find skewered scorpions in the streets and people are eating them like you would an apple in other countries. Being one of the largest insect-eating countries in the world, you can expect some scary and shocking fried insects in most cities in China and that includes cockroaches. China has some of the largest cockroach farms in the world.

The farmed roaches pose less of a health risk when eaten than the wild ones which tend to fetch disease-causing pathogens along the way. Most of the farmed roaches are used to make medicine and animal feed, so don’t be surprised if roach protein is part of your next dose of painkillers. The rest are fried and served to people in the streets and while the fried roaches still look creepy, they are crunchy and tasty just like fried chicken.

Now to the freakiest critter treat on the list. Tarantulas are as scary as they are poisonous. While Cambodia has its share of creepy critter dishes, the tarantulas are the ones that scare even the food daredevils. The crispy spiders are not poisonous because the spiders allegedly lose their poison when they are cooked so you can just munch down on an entire spider without fearing the consequences. Most of the spiders are caught in the wild, which is a tough job in itself; but you can only imagine the task of keeping them in the pan long enough to be fried to death without at least one crawling out to exert revenge.