Nigeria is Africa’s most populous country with the most vibrant economy and one thing the country isn’t short of is delicious traditional food. When you reach Nigeria, you just have to marvel at the twists in recipes that can give a different name and taste to conventional foods. From Jollof rice and fried chicken to Eba, Fufu, Peppersoup and Moimoi, Nigerian food is truly finger-licking. If you would like to enjoy the true depth of the country’s culinary variety, it would be wise to visit small restaurants and street foods. Moving away from the city into the villages will also give you a chance to enjoy some of Africa’s unconventional foods which are strange but delicious; In their own right. 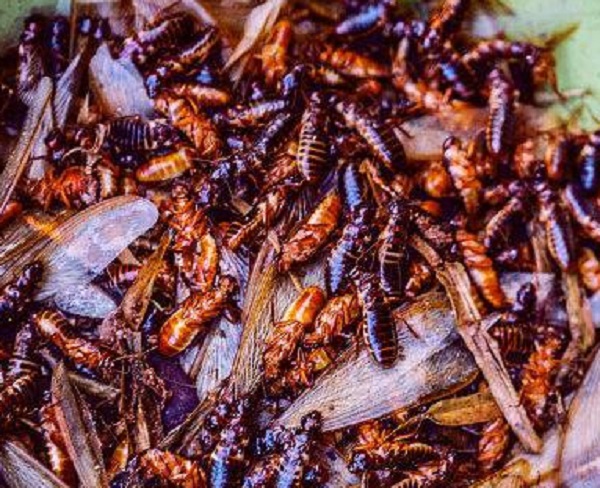 You really haven’t had the true taste of Africa until after you have eaten crunchy termites, known in South Western Nigeria as Esunsun. The termites are quite easy to harvest, all you have to do is create a structure over their holes when they are exiting the ground and then create one exit that shines light into the enclosure and they will all follow the light. The termites can be eaten raw, dried and salted or most popularly, crunchy friend. When flavoured in pepper and sauce, they make a great dish alongside your regular starch whether it is fufu, eba or rice.

Kwanya is the name given to this soup which is actually common is all parts of the country. Cow’s brain soup is widely consumed around the world with each country having their own recipe. The Nigerian one is prized for its ability to dissolve in your mouth when you eat which means the cook has to do a good job at spicing and flavouring it. When cooked by an expert, you won’t even think of it as brains when eating because they bind together nicely to form a soft tasty meat just like a liver. 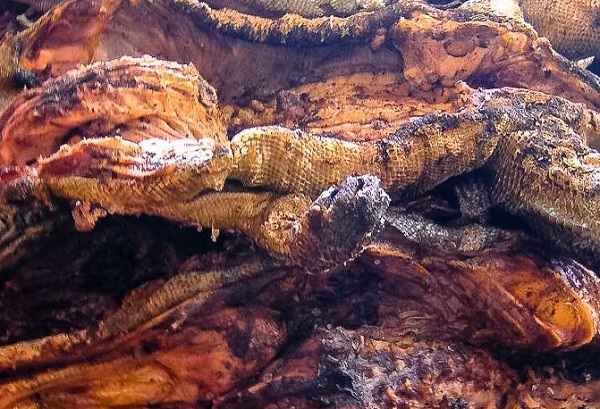 Agama lizard is a species of long-tailed lizards widely found in Nigeria and they can be classified as Nigeria’s version of iguanas. Just like Iguanas are grilled in Florida, some Nigerians in the rural areas love the taste of grilled agama lizards. The lizards have lean white meat which when salted and grilled tastes just like chicken to some. The tradition dates back to the Nigerian civil war when food was scarce and some people resorted to plucking lizards out of trees for proteins and the habit hasn’t died in some areas. Monitor lizards are also grilled and eaten in parts of the country although they are not in abundance like the agamas.

Crickets were a popular food in Nigeria in the ancient days when the insects would swarm over villages and people would wait for the night to come and shake them off trees into big pots while they were dormant. When fried, crickets make a great source of proteins. Crickets don’t swarm in Nigeria anymore, so most people only harvest grasshoppers and the few crickets they can find on a small scale and that is what you will find fried and served in parts of the country.

The grass cutter is also called the Greater cane rat which is a common pest in parts of Africa but actually domesticated in some parts of West Africa including Ghana, Cameroon and Nigeria. While eating rodents in itself is stomach-churning for many, the idea of eating their faecal matter is even worse. Some people say that this rodent’s poop is nutritious and also gives food a flavour and therefore adds it to their food. 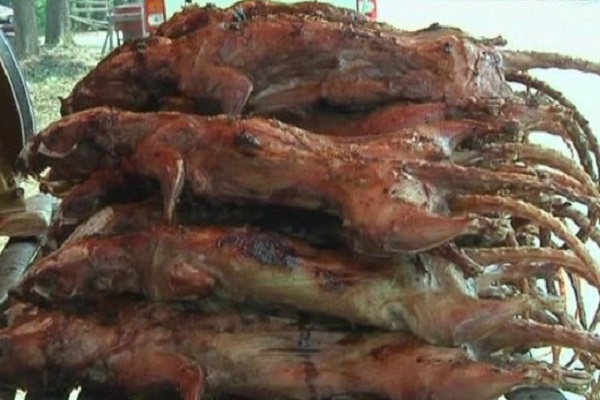 It is called bushmeat in Nigeria and it is a real treat, served all over the country including in the cities such as Lagos. The giant rodents have been hunted for centuries and now, some people farm them which is healthier than the wild rodents which could easily cause diseases. The meat can be grilled or be steamed but the best one is the stewed version served alongside fufu or plantains.

The grilled Diamondback is a rare but loved treat in parts of the US while some Australians love the taste of the python. In Nigeria, snake-eating communities don’t tend to discriminate depending on species. Many locals don’t consider snakes a delicacy but you can find certain restaurants that serve grilled and stewed snake meat. Other countries in West Africa including Benin and Cameroon also have snake markets and restaurants where you can choose your favourite serpent for dinner. 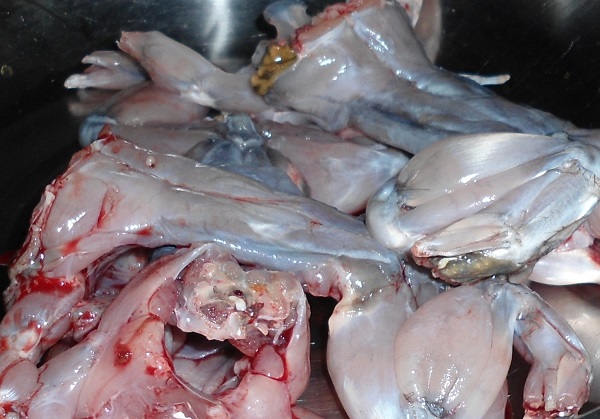 Frog legs are not just a treat in France, Nigeria and other African countries are home to the Giant African Bull Frog and they don’t hesitate to convert it to protein. Frogs also have white meat and when grilled or fried, you could easily confuse their meat for chicken meat. Just like there are hotels that serve snake meat, some hotels serve frogs and some publications actually blamed them for putting the species of the large frogs in danger of extinction.

These worms are a delicacy in many places around the world including parts of Asia such as the Philippines, Cambodia and Vietnam. They are harvested from palm trees and are actually considered pests which is why it is a relief when they find their way to the pot. They are often fried until they are crunchy. In Nigeria, you will find them being hawked on skewers, especially in areas where they are in abundance. 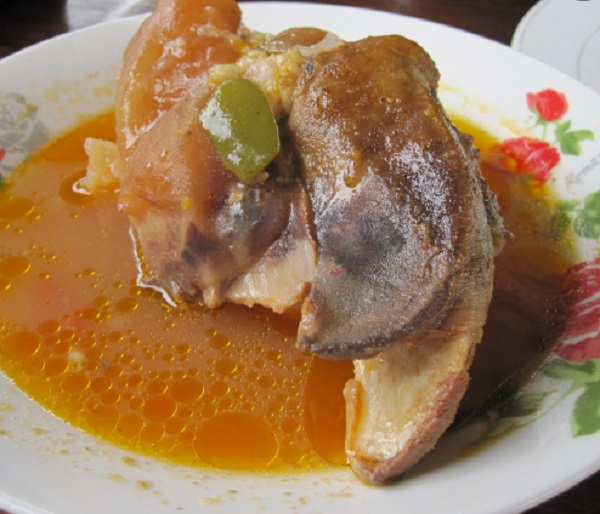 A cow’s leg doesn’t have a lot of meat to it but it does make great soup when simmered for long enough for the skin to peel off the legs. Below the tough hooves, there is a soft tissue which is also eaten alongside the skin which softens when boiled. The soup is common in the streets and even in some homes. When a cow’s legs are used to make either red or regular pepper soup, you can be sure that this treat is worth a try.

Have you ever been to Nigeria? Which of these dishes would you try? Do let us know in the comments below.

Top 10 Craziest Sandwiches Ever Made