Zimbabwe is one of the most beautiful nations on the African continent but its fame is often overshadowed by its richer neighbours like South Africa and Botswana. The country is still home to some of the best traditional African dishes that haven’t changed for centuries. The combination of wild ingredients and traditional cooking methods make some Zimbabwean foods a true taste of wild Africa. The country is home to all of Africa’s big five animals with many tourist destinations that are not as expensive and overcrowded as is the case in Zimbabwe and South Africa. There may be versions of these traditional dishes in other African countries but they won’t taste anything like what you will find in Zimbabwe. 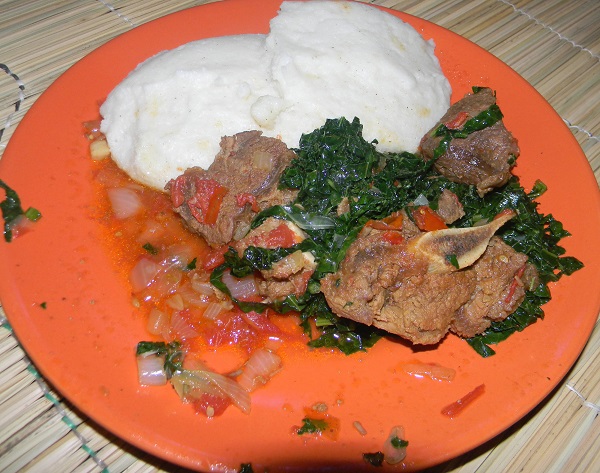 Sadza is the backbone of all Zimbabwean dishes. While many prefer the white one made using maize flour, the best Sadza should be made using sorghum or millet flour. It is a pretty basic meal prepared by boiling flour in a pot until the water evaporates and then more flour is added as the meal is pressed with a cooking stick or spoon till it hardens.

Sadza is served in every household in Zimbabwe often alongside meat stew or any other protein, vegetable or soup that is made for the day. The most popular dish is Sadza and meat stew. Zimbabwean meat is fried in oil-soaked with onions, tomatoes and other spices that give it a savoury taste like nothing you have ever had. Green vegetables are also a must-have when eating your Sadza for the best experience.

This is the get-together meal for most Zimbabweans signified by the presence of a large flat pan on a big open fire. Gango is simply a mixture of meat cooked together and if you get a great cook, you can be sure to lick your fingers. The most common version is made up of chicken parts including innards such as the gizzard, liver, lungs and intestines as well as the neck and other meats.

You can also find Gango made using a mixture of beef and pork with a similarly tasty finishing. The trick is to get the spicing right and make sure that the pieces join the pan at the right time so that they cook well enough to be tasty and not overcook. It is eaten win Sadza and as usual, green vegetables. 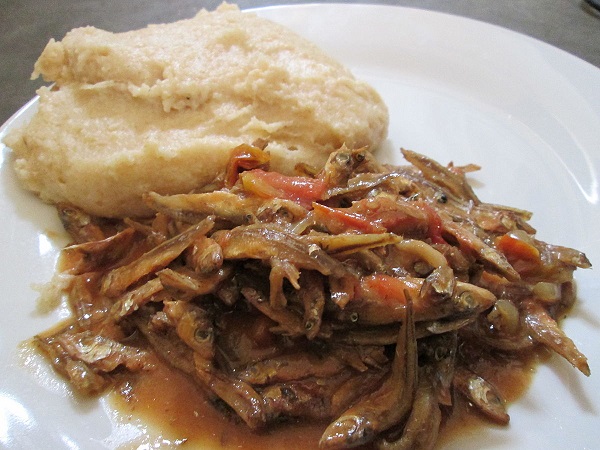 This is a dish of small fish that resemble sardines but they are a little smaller but super tasty when deep-fried in lots of oil and spices. They are fished from freshwater lakes which dot several parts of Africa including Lake Kariba and other small lakes in Zimbabwe. The fish are best when cooked into a stew or fried while fresh from the lake but that feast is only limited to the fishing villages. The most common version is the sun-dried Kapenta cooked in spices mixed with peanuts, tomatoes and onions. They are eaten alongside Sadza green vegetables.

There are many types of porridge in Zimbabwe as they make the best alternative to Sadza, and if you get the grannies to make some for you, you will have the feast of a lifetime. The nest of them is Nhopi (pumpkin porridge) which is made by boiling the flesh of pumpkins until it is runny and then mixing it with peanut butter and milk. Fermented porridge is made by mixing maize flour with sugar and then soaking it with water before fermenting for up to three days. The porridge is then made by adding water to the sourdough and then sweetening it with sugar. 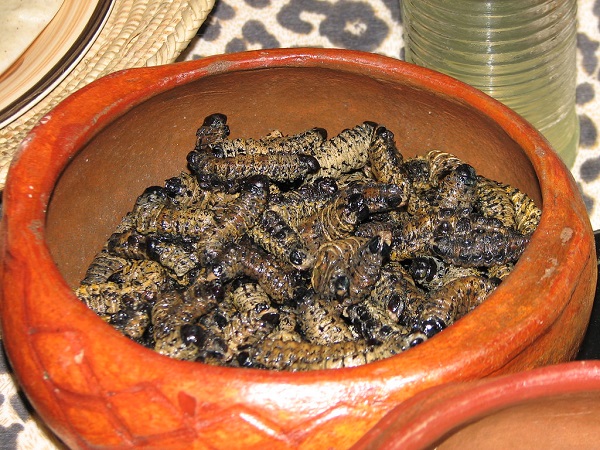 Eating insects in Africa is a practice that goes back millennia and mopane worms are one of the few insect dishes still enjoyed on the continent. The worms are the larvae of the emperor moth that tend to feed on the leaves of the Mopane tree. The worms are collected and cleaned by squeezing their innards until only the cream/yellow flesh is left. In Zimbabwe, the dried worms are boiled in a little water before being fried in onions, tomatoes and sometimes peanuts. The worms are also eaten alongside Sadza.

Did you know that tripe was Nelson Mandela’s favourite dish? Well, eating a cow’s innards is no strange thing in Africa and in Zimbabwe, the real cooks make a great stew using tripe. The tripe needs to be cleaned thoroughly and also takes up to three hours of boiling to soften enough for the stew. They are often boiled over a large open fire for hours on end before being infused with spices and then savoured with onions, carrots, tomatoes, garlic and other additions the cook may like. They are then served with Sadza or rice. 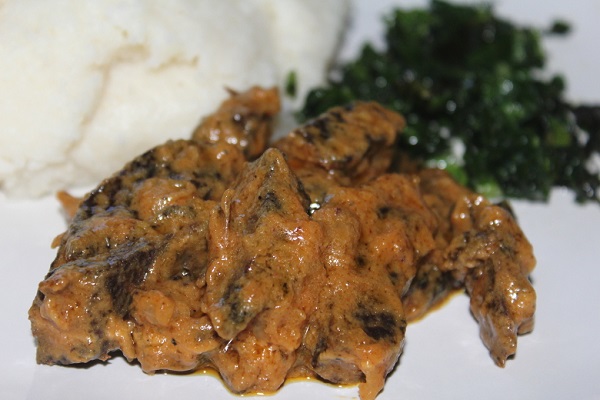 Traditionally, this dish was prepared by hanging meat (often game meat) over the fireplace in the kitchen and allowing it to air dry while acquiring the smoked flavour. Some people still do the same, especially in the rural areas but the most common version is the artificially dried meats that are even sold in the stores. The meat is then boiled to soften before being soaked in spices and fried. It is one of the best traditional dishes in the country with recipes for the final dish varying from one community to another.

Zimbabwe is not short of vegan dishes either and this is the best of the traditional ones for any guest. It is just a mixture of well-seasoned and cooked grains and seeds which combine perfectly to make a whole meal that you can just wash down with a glass of water or milk. The most common ingredients are cowpeas, maize, beans and as usual in Zimbabwe, peanuts. The resulting mixture is rich in vitamins and proteins and also tasty once cooked to perfection. 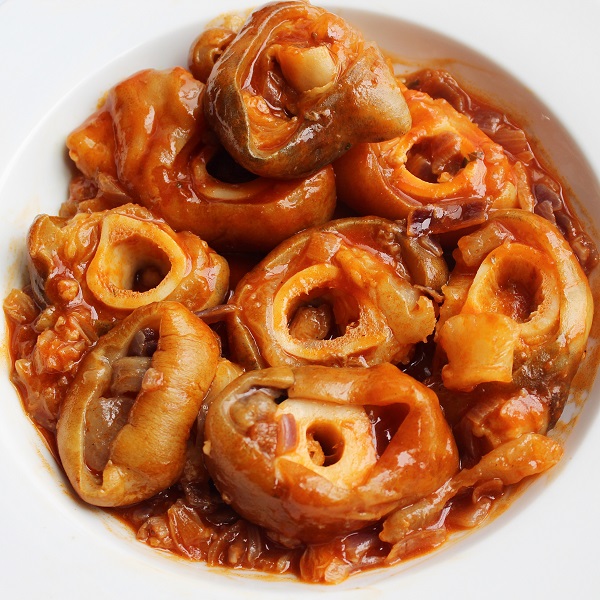 This is another dish that some foreigners frown at until they finally taste it and realize that is really nice. It is made using a cow’s legs which are cleaned, chopped into smaller pieces and then boiled for hours until the meat peels off the bones and the soup takes on a strong flavour from the bones. The soup is often spiced with pepper before being savoured with tomatoes and onions. The soup can be served with Sadza or any other carbohydrate.

This is the second most popular carbohydrate after Sadza. Rice straight from the field is preferred as many locals say it cooks better than the factory-processed versions. The rice is cooked with peanut butter to take on a brownish appearance and a nutty taste that stands out from any other rice you have eaten. The rice is then served with meat or chicken stew or any other protein.

Have you tried any of these foods? Do you know of any other recipes from Zimbabwe? Why not let us know in the comments below.

Ten Classic and Traditional Spanish Foods You Need to Try

Ten Classic and Traditional Romanian Foods You Need to Try

Ten Classic and Traditional Austrian Foods You Need to Try

Ten Classic and Traditional Slovak Foods You Need to Try

Ten Classic and Traditional Albanian Foods You Need to Try

Ten Classic and Traditional Luxembourg Foods You Need to Try