Greek cuisine speaks for itself. It is a delicious and sophisticated traditional food that will fill your stomach and your mind. From its mezés to its desserts, when you visit Greece you are going to want to try all of that it has to offer. From the beef stew, Stifado to the delicious Yemista and Soutzoukakia to the stuffed eggplant dish called Papoutsakia, and tasty soups like Fasolada. Greek cuisine has something for everyone, start your day with a cup of Frappé or Ellinikos and a plate of traditional Greek breakfast. But no matter what you have, don’t forget to try these 10 Delicious Greek Dishes: 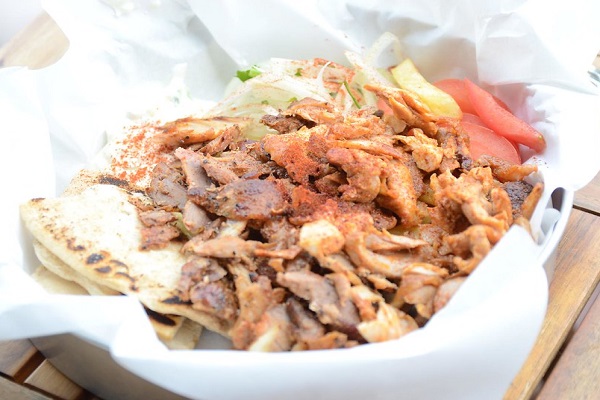 Souvlaki and Gyros are both made with meat and both are equally popular in Greece. Souvlaki consists of small pieces of meat and vegetables grilled on a skewer and served straight out of the skewer. The lamb, pork or chicken is accompanied by dips/yoghurt, flatbread and salad. For Gyros the meat is cooked on a vertical rotisserie and then the meat and salad are wrapped in a lightly grilled flatbread like shawarma and tacos al pastor. The dish is derived from the lamb-based doner kebab and is often served with potato fries as well as garlic sauce or Tzatziki yoghurt dip. You can find these street foods everywhere in Greece. 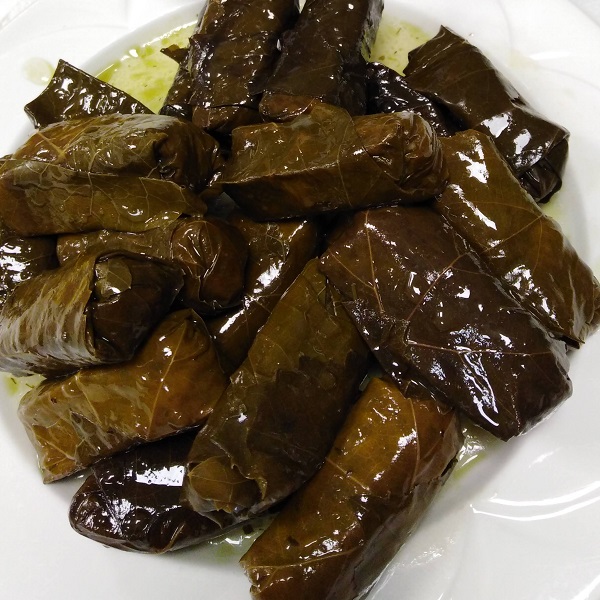 Dolmadakia or Dolmades are stuffed grape leaves. Dolmas are eaten as a meze in Greece meaning you can have it as an appetizer. Dolmades are vine or grape leaves prepared with olive oil and stuffed with herby, lemony rice or meat or vegetables and steamed. These delicious small parcels are generally served cold with a garlic-yoghurt sauce. 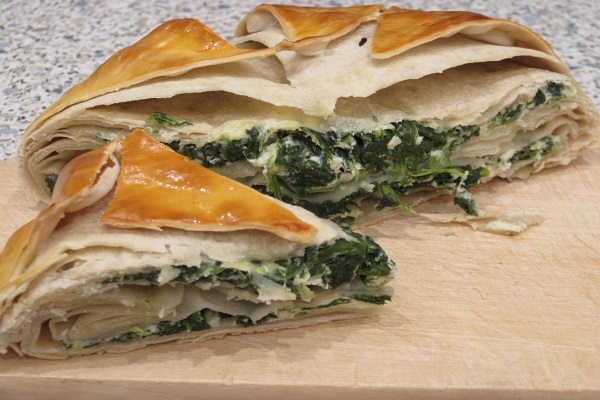 Spanakopita or Greek spinach pie is a Greek savoury pastry that is mainly made with spinach, feta cheese, onions or spring onions and eggs. You can have this traditional and delicious Greek dish any time in the day as a snack or starter. The crispy layer with the goodness of spinach is a must-try dish in Greece. Tiropita or tyropita, on the other side, is a layered pastry food made with layers of buttered phyllo and filled with a cheese-egg mixture. This delicious pastry is also known as ‘Greek cheese pie’ and is usually eaten as a starter or a mid-day snack. The dish consists of feta cheese, melted butter and olive oil. 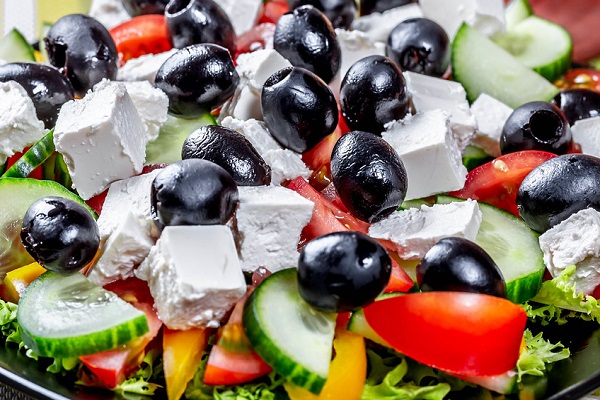 Greek salad or horiatiki salad or Choriatiki is a tasty and healthy bowl of veggies including tomatoes, sliced cucumbers, onion, feta cheese, and olives seasoned with salt and Greek mountain oregano. The salad is usually served undressed or dressed with olive oil. Green bell pepper slices or caper berries are also added some times. Greek salad is a must-have for Greeks with almost every meal and is usually eaten as a starter. 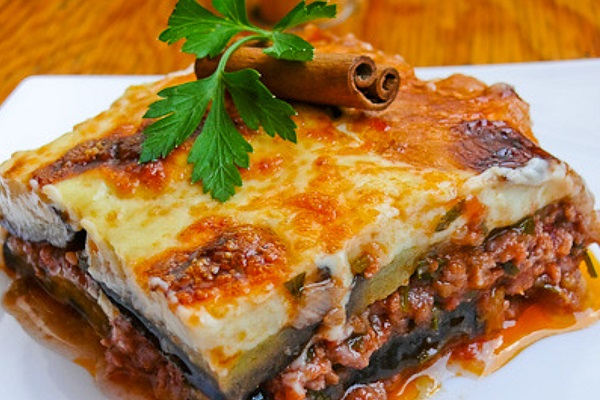 Moussaka is one of the most popular traditional Greek dishes. The eggplant- or potato-based dish often includes minced beef layered with creamy béchamel sauce. This creamy and filling dish is served as the main course across Greece and it is also popular in the Middle East. 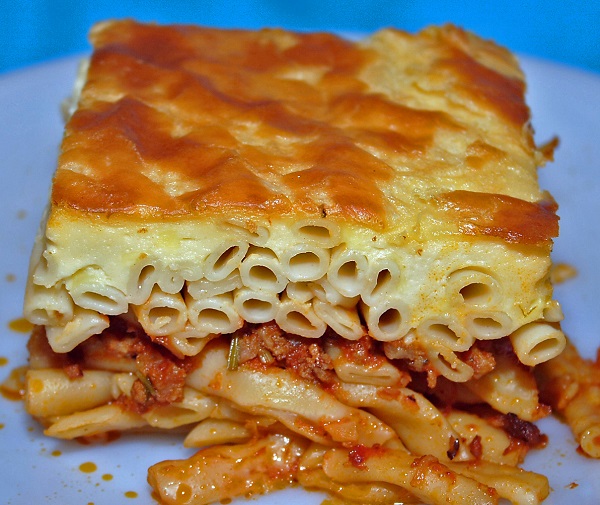 Pastitsio or pastichio is a baked pasta dish with ground meat and béchamel sauce. The Greek dish also includes spices like nutmeg or allspice and often sprinkled with goat cheese. This popular dish is mainly served as a main course, with a salad dressed with wine vinegar and virgin olive oil. 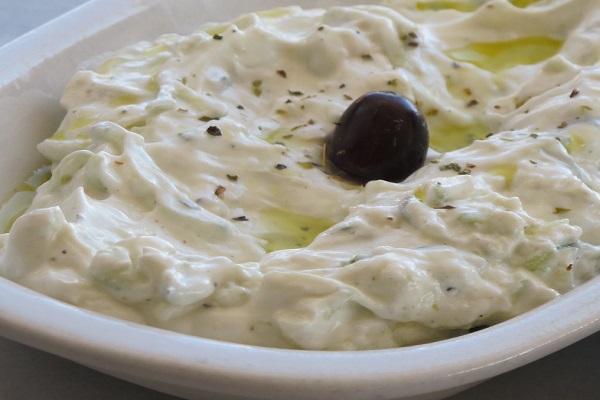 Believed to be originated from the Ottoman Empire, Tzatziki is one of the classic Greek sauces or appetizers with a range of variations. It is usually made of salted strained yoghurt or diluted yoghurt mixed with cucumbers, garlic, salt, olive oil, sometimes with vinegar or lemon juice, and herbs such as dill, mint, parsley and thyme. This simple dish is easy to prepare and delicious to have. 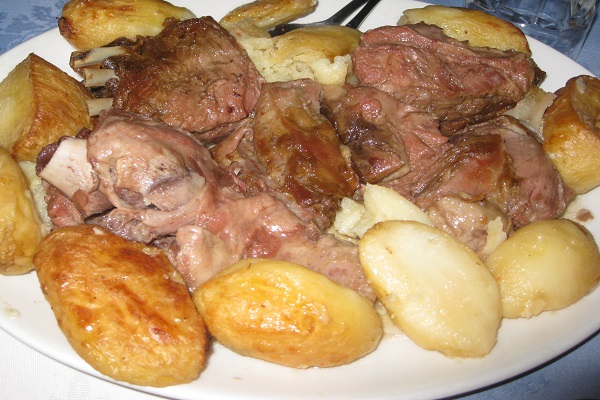 Lamb kleftiko, or ‘bandit’s lamb’ is one of the best lamb dishes you will ever have. kleftiko was originally cooked in an earth oven which is a small pit in the ground as it was stolen meat. These days it is slowly cooked with potatoes to make it very tender. This simple lamb dish is one of the best dishes to have in Greece. 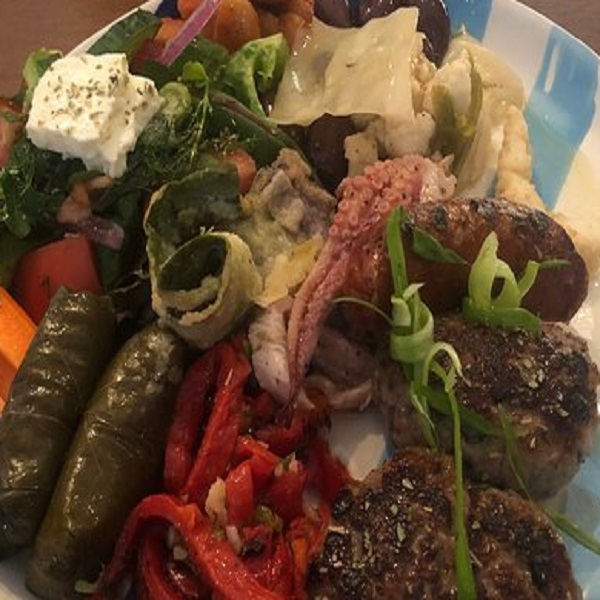 Meze or mezze is a selection of small dishes that are served as appetizers or to accompany drinks and Greek cuisine has some delicious mezes, we are just mentioning some best of them.
Saganaki- It is an appetizer of pan-fried firm cheese dressed with olive oil and herbs. 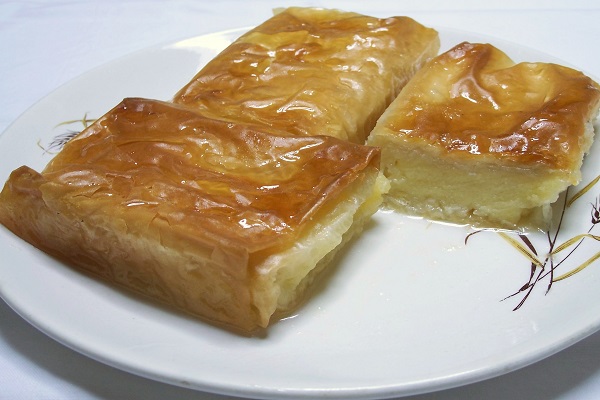 The dessert of Greek cuisine deserves a list of their own. But here we are going to mention just a few of the best ones-

There are many other delicious Greek desserts such as Koulouria, Pies of Kythnos, Melomakarona, Portokalopita and Tirokroketes. I hope you have enjoyed this post and if you have tried any of these foods or would like to recommend some other Greek recipes do let us know in the comments below.

Ten Classic and Traditional Greek Foods You Need to Try

2 thoughts on “Ten Delicious Greek Dishes You Must Try”