International cuisines may seem repulsive to foreigners, but within bizarre foods’ countries of origin, they’re nothing out of the ordinary. Many non-Americans are absolutely disgusted by the U.S.A.’s love for hot dogs. Numerous Americans might feel similarly about Australians snacking on plump witchetty grub. However, larvae are only the beginning of strange foods eaten all around the world. Whether we’re talking about rodents, fungi, arachnids, or genitalia, as it turns out, there is not much humans won’t eat. If you’re unsure what to pair with an adventurous meal, try the cobra blood often drunk in Indonesia, or Korean wine infused with dead baby mice. 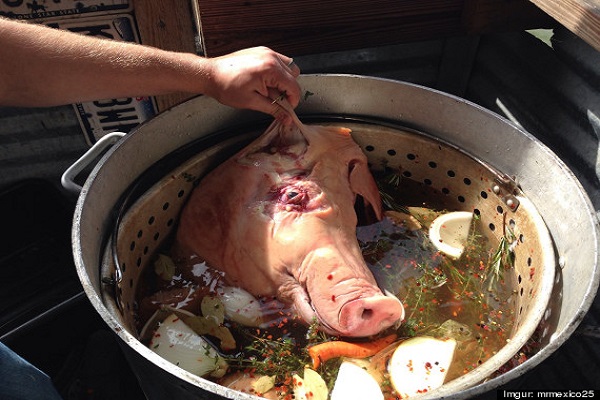 Though its name might make you think of cheddar, head cheese is nothing like the yellow squares we slap on ham sandwiches. It’s actually a terrine (i.e., meat jelly) made from animal head. Cow, pig, or sheep may be used. Though the brains and eyeballs are typically removed, the heart and feet may be added, and the tongue is often included as well. The animal’s head is severed, cleaned, and cooked in stock long enough that the flesh can be effortlessly separated from the bone. Cooked head meat is cut and moulded into a loaf or stuffed into a sausage casing and eaten at room temperature. This dish is not exclusive to Europe; by now, it’s gained popularity all over the world, including the American South. People frequently eat it on crackers. Next time you’re in the mood for an appetizer with a flavoured face as an ingredient, reach for the misleadingly-named head cheese.

Pastilla is a savoury pigeon meat pie. This meal is much easier to stomach when you use chicken or lamb as a substitute. Tradition always points to the pigeon, though. It sounds much more regal when you call it a “squab” and the taste is supposed to be rather appealing. It’s one of the few dishes on this list internationally regarded as delicious. What makes it strange is familiarity with pigeons as a nuisance that poo on your porch and car, rather than a fine protein worth making the centrepiece of your meal. Pastilla’s position as an enduring traditional Moroccan dish proves that squabs will suffice if you’re willing to try them, though. The dish is prepared with almonds, cinnamon, and sugar. It usually has a sweet-and-sour flavour. On top of being especially flavorful, pastilla is surprisingly versatile. It can even be made with seafood. Fish pie?! Yum! 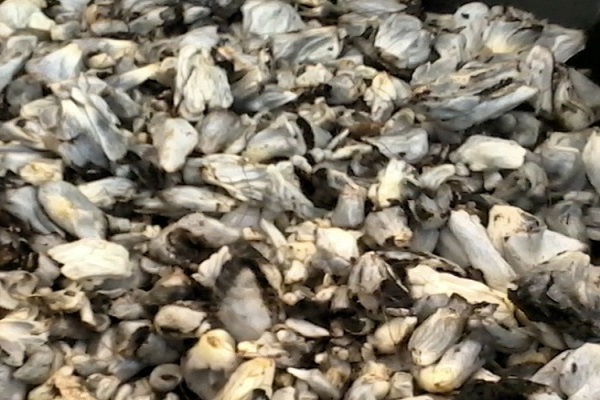 Otherwise known as corn smut and Mexican truffle, huitlacoche is a fungus that develops on untreated corn after rain. The growth pops out from the shuck and completely destroys the ear. On the other hand, huitlacoche is healthier and worth significantly more than the corn itself, so it’s hard to see a downside to growing it. That hasn’t stopped corn farmers from trying to prevent the spread of this much-loved fungus in their corn crops. Huitlacoche is technically a type of mushroom. It can be used in cooking in ways that you’d use any old mushroom. You can recognize it by its unique presentation, like enormous corn kernel tumours, greyish in colour and freakishly oversized. Huitlacoche turns black when you cook it. It tastes like a corn-infused mushroom, earthy as would be expected. You can find this delicacy canned in the United States. It’s much easier to come across fresh huitlacoche fungus in corn smut-adoring Mexico.

Squirrel brains have garnered devoted fans in the American South—around rural Kentucky in particular. Unfortunately, these furry rodents’ brains are not quite as safe for consumption as their bodies. Eating squirrel brains may lead to the potentially fatal Creutzfeldt-Jakob disease, which is more widely known today as mad cow disease. This illness causes holes to form in the brain tissue and severely affects the host. “Elk, deer, mink, rodents and other wild animals are known to develop variants of mad cow disease that collectively are called transmissible spongiform encephalopathies” (The New York Times). We should be wary to eat the brains of any of these animals, but not everyone is. Squirrels are hunted alive or acquired as road kill for Sunday dinner all the time. Eating their brains poses a serious hazard, and yet people still regularly sample the gooey goodness from their craniums. What’s a little mad cow disease among friends and family? 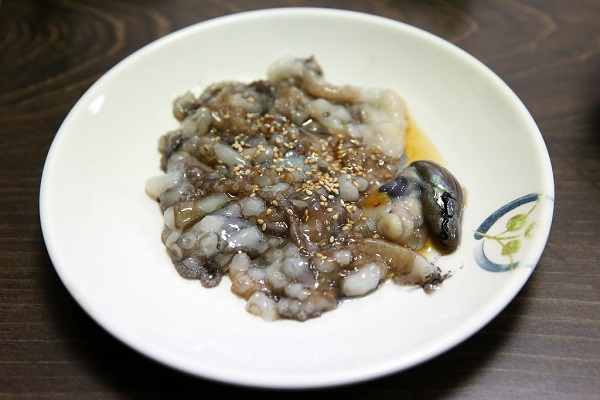 When eating adventurously, one way to up the ante is to dine on still-wriggling parts of sea creatures. The freshly removed tentacles of baby octopi are called sannakji. Though separated from the head, the raw tentacles continue to writhe on the plate, and then in your mouth as you eat. There’s a danger of asphyxiation since the suction cups can cling to your throat. However, if you dip the tentacles in sesame oil and chew your food very well, the tentacles should go down smooth. Sannakji has seen a bit of controversy in America. It was protested in New York by PETA since the octopi appear to be alive during preparation, desperate to escape as their tentacles are hacked off. It’s actually unique nerve activity that makes the creatures seem alive when they’re not. This squirmy dish is quite popular and is even rumoured to be an aphrodisiac.

5. Testicles of the World

In Iceland, pickled ram testicles are called hrútspungur. The severed sacks are moulded into blocks, prepared in lactic acid, and basically served as tangy testicle meat-cakes. Hrútspungur is often eaten during the annual Þorrablót (Thorrablot) winter celebration. While this dish might seem weird, even more bizarre is Asian shirako, or fish testes. These are filled with milt that will explode in your mouth when you chew—kind of like Gushers, but with a very different filling. You might want to know beforehand that milt is fish semen. “The milt of water creatures, such as cod, anglerfish, and puffer fish, has a custard-like texture when cooked and is eaten as a delicacy in Japan” (Fox News). If Iceland and Asia are too far to travel for such whimsical fare, America serves rocky mountain oysters (i.e., deep-fried bull testicles) aplenty, and even holds annual festivals in their honour. 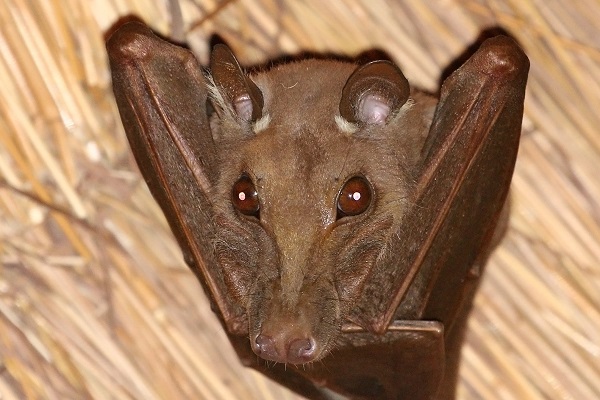 Since ancient times, bats have been eaten as part of daily meals and used in traditional medicine around the world. Indonesia is simply one place where these practices remain the norm. Fruit bats are believed by many Indonesians to treat asthma and other medical ailments, so the winged wonders are sold by local street vendors. The bats are often kept in crowded cages and inhumane conditions until they’re purchased. Some don’t even survive their time in the cage. They’ve been so highly sought-after in recent decades that various species are now endangered. Flying foxes are a very popular bat in Indonesian trade. Many people genuinely enjoy the taste and tourists travel from afar to sample the food. Bats are often smoked until they have a jerky-like consistency or boiled whole in soup broth. Maybe Ozzy Osbourne, who famously bit off a bat’s head onstage, isn’t as weird as we all think.

Giant bullfrogs of Namibia begin croaking after the third rain of the season. Their croaks tell other frogs it’s mating time, and tell humans it’s eatin’ time! Mating season means their toxins aren’t so potent anymore, so the amphibians are safer to consume. If eaten too early, they may poison the people who eat them. Early-season chefs must line their cookware with wood from the local Namibian Omuhongo tree to neutralize the poison. Refusal to take the necessary precautions can lead to painful urination and kidney failure, regionally known as ‘oshiketakata.’ The most ill-fated diners may even die from this colossal bullfrog’s toxic secretions. Namibians have learned to safely prepare everything but the alimentary tract and specific organs, unlike the French, who only eat the poison-free legs as part of their traditional cuisine. If they’d just taste the scrumptious little arms, maybe they’d be more willing to risk death for this mouthwatering meal. 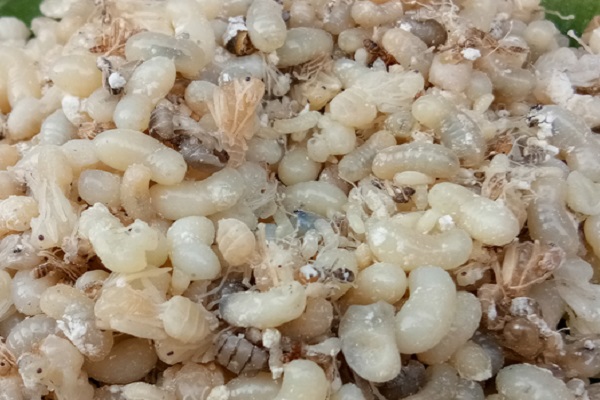 If you’ve ever wanted to sample the larvae and pupae of ants, escamoles are definitely for you! This dish is an ancient tradition of Mexico. It was even used in trade when the Aztecs were still around. Escamoles are still collected by labourers called ‘escamoleros’ today. A traditional way to flavour escamoles is with “a small amount of green chili and finely chopped onion as well as a few leaves of epazote” (Slow Food Foundation for Biodiversity). Escamoles, which happen to be impressively high in protein, are most often served on tacos or tortillas. They’re nicknamed ‘insect caviar.’ To get the main ingredient, escamoleros must dig deep under agave plants and suffer copious bites, as they collect larvae and pupae guarded by live ants. This off-putting process and the scarcity of escamoleros make escamoles relatively hard to acquire. It also helps explain why they cost approximately as much as beluga whale caviar.

The ancient Romans enjoyed dining on dormice, and Slovenians have maintained this culinary tradition into the modern day. Dormice are plump little rodents that spend their lives exploring the trees and brush. They look like a cross between the mouse and the squirrel. “When it comes time to prepare the dormice, people employ a variety of cooking methods, but stewing them in red wine with vegetables is particularly popular” (Gourmet). Their bodies can be cooked whole and in large quantities. The pelts may be used to make winter clothing. Annual dormouse hunting is a proud tradition and cause for celebration in Slovenia. It’s done at night since dormice are nocturnal. These creatures have to be caught during a particular time of the year, but when they’re not available, rats may be used as a substitute—because if there’s anything more enjoyable than eating stewed dormice, it’s eating stewed rats

Would you try any of these foods? Have you already tried one of these insane foods? If you have why not let us know in the comments below.

Ten of the Most Dangerous Foods in the World

Ten Delightful Frozen Desserts From Around the World

Ten Crazy and Interesting Pizza Toppings from Around the World

Ten of The Weirdest Fast Food Items Around the World